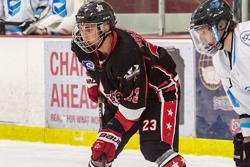 A native of Minsk, Belarus, the 18-year old senior at Westmont Hilltop High School in Johnstown, PA, is in his second season with the U18 AAA Stars. Prior to joining the U18 Stars squad, Yerameichyk skated one season for the U16 AAA Esmark Stars.

"Raman has worked hard to integrate the North American style of the game with his world-class skill set," said Esmark 18U head coach Dave Kosick. "And this is a great reward for that hard work and sweat equity."

Yerameichyk joins teammates Tyler Stewart and Jackson Dobbs, both of whom had previously signed tenders with the Johnstown Tomahawks, of the NAHL’s East Division.

Pittsburgh, PA - The Esmark Stars of the North American Prospects Hockey League (NAPHL) are pleased to announce that 18U AAA goaltender Parker Rey has signed a tender agreement with the Jersey Hitmen of the USPHL's "National Collegiate Development Conference" (NCDC) Division.  The Hitmen are located in Wayne, NJ.

He backstopped the 18U Stars to the Mid-American District Championship running off three straight round-robin wins ... Cleveland Barons (4-3), Ohio AAA Blue Jackets (4-3 OT/SO win), Gilmour Academy (6-5 OT/SO win) ... and then earning the win in goal and the Mid-American title with a 2-1 overtime win over Culver Military Academy in which he stopped 48 of 49 shots he faced.

"Parker's performance against Culver was a masterpiece and a clear showing of his capabilities," said Esmark 18U head coach Dave Kosick.

"He brings a great work ethic and mindset to the rink every day. Add that to his physical size and athletic ability and you have a goaltender who checks off all the boxes that elite junior and collegiate teams seek," Kosick added.

Post-season, Rey was selected to participate in the NAPHL's Top Prospects Tournament, which was held in conjunction with the NAHL's Robertson Cup Championship in Blaine, MN. That event brought together ten elite all-star teams, including teams from the NAPHL, AYHL, TOEHL, NA3HL, Minnesota, Michigan and Europe. 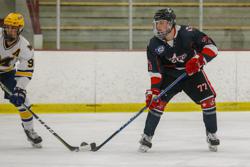 18U forward Jackson Dobbs has signed a North American Hockey League (NAHL) tender agreement with the Johnstown Tomahawks of the NAHL’s East Division.

"Jackson has been on the Tomahawks radar for a while," said Esmark 18U head coach Dave Kosick. "He had a really good showing at the Tomahawks camp and we were was asked to work with him on some aspects of his game. And work he has."

Dobbs joins teammate Tyler Stewart, who also signed with the Tomahawks, as the first Esmark players to sign NAHL tenders this season. 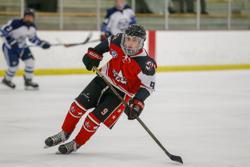 18U forward Tyler Stewart has signed a North American Hockey League (NAHL) tender agreement with the Johnstown Tomahawks of the NAHL’s East Division.

A native of Burrell, PA, the 17-year old junior at Burrell High School is in his first season with the U18 AAA Stars. He skated the past two seasons with the highly regarded and nationally ranked top 10 Pittsburgh Vipers AA U16 squad under Si Bishop.

Overall he leads the Stars Midget Major club in scoring recording 52 points (24 goals, 28 assists), including 2 power play goals, in 38 overall games, and helping pace the Stars to a 28-8-1-1 record to date.

"Tyler most definitely has world-class skills," said Esmark 18U head coach Dave Kosick. "And because of that ... we have fielded a lot of calls from junior teams across the nation who have been overwhelmingly impressed by what he does in the offensive zone."

Stewart joins teammate Jackson Dobbs, who also signed with the Tomahawks, as the first Esmark players to sign NAHL tenders this season. 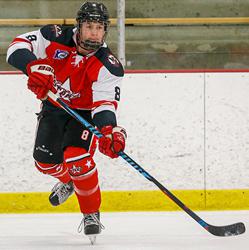 The Ice Wolves, who will play out of the Outpost Ice Arena in northeast Albuquerque, NM, are one of two new expansion teams in the NAHL for the 2019-2020 season, joining the Maine Nordiques.

A native of Conneaut Lake, PA, the 18-year old senior at Conneaut Lake High School just completed his second season with the U18 AAA Stars, helping lead Esmark to the U18 Tier I Mid American District Championship and the USA Hockey U18 Tier I National Championships.

"Drew is a young man who showed up at practice everyday determined to be a better player," said Esmark 18U head coach Dave Kosick. "He is an elite-level d-man with great skating ability and an outstanding overall skill set."

Jacobs is the fourth player from the Esmark Stars 18U team who has signed an NAHL tender so far this season. He joins teammates Raman Yerameichyk, Chippewa Steel,  and Tyler Stewart and Jackson Dobbs, both  Johnstown Tomahawks, in signing tenders for NAHL teams for the 2019-2020 season.